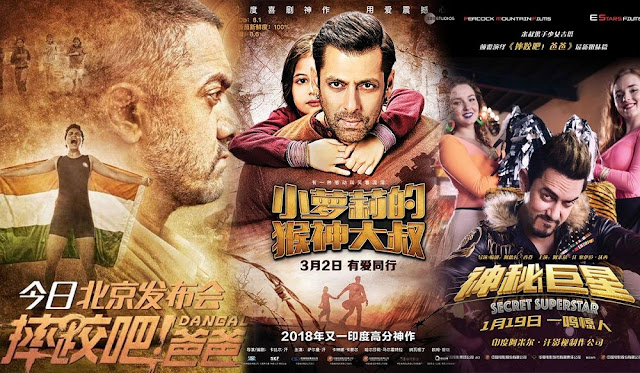 China market has now become the biggest market for Bollywood movies. Let's have a look at those Hindi movies make the round in China.

Akshay Kumar's movie ‘Toilet: Ek Prem Katha’ is a film with a social message. This movie is loved by Chinese audience. It was released in China as "Toilet Hero" in 11,500 screens in China. Movie yearns Rs. 15 crores on its opening day.

Aamir Khan is not only the superstar in India but nowadays he is quite popular in China. He is actually one of the well-known personalities in China. His movie secret superstar earned Rs. 7.5 billion in China. This movie is one of the low budget movies of Aamir. But it is able to beat Guardians of the Galaxy Vol.2 in Chinese box office.

This is a story of a little mute girl from Pakistan by mistakenly left by her mother in India. An innocent Indian boy helps her to go back to Pakistan. This movie shows their journey from India to Pakistan. Maybe we hear a lot of India Pakistan hate story but it is an India Pakistan love story. Salman Khan's Movie Bajrangi Bhaijaan able to win the heart of Chinese people. This movie is released in 8,000 cinemas across China on March 2, 2018.

Irrfan Khan's sleeper hit "Hindi Medium" opened in mainland China on April 4, 2018. On the opening day of the film grossed Rs 22.25 crores in its China earnings.

China loves Aamir Khan from the day of Lagaan. Aamir Khan has got a huge fandom from China. Dangal is a semi-biographical movie on the life of Indian female wrestlers Geet and Babita.

Anushka Sharma and Aamir Khan starrer satirical comedy-drama are one of the best movies all time. This movie is about a human-like alien on a research mission to earth.